14 And God said, “Let there be lights in the expanse of the heavens to separate the day from the night. And let them be for SIGNS and for seasons,and for days and years,

4 He determines the number of the stars; he gives to all of them their names. 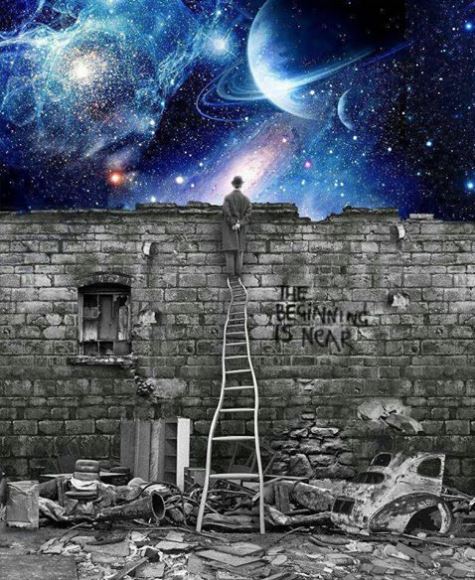 Revelation 12
1   A great sign appeared in heaven: a woman clothed with the sun, with the moon under her feet and a crown of twelve stars on her head. 2 She was pregnant and cried out in pain as she was about to give birth. 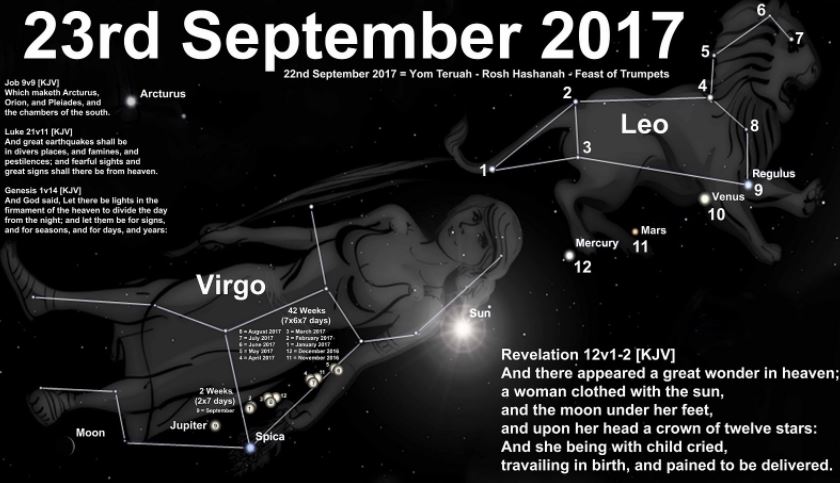 The Leo representing 1 of the 12 Tribes of Judah and the lineage of Abraham, Isaac & Jacob rose above the Virgo representing the blessed Virgin Mary who was clothed in the sun, with the moon under her feet & a crown of 12 stars (Leo with 9 Stars, Mercury, Venus & Mars) gave birth to the King (Jupiter is the king planet after almost 10 months of being in the belly of Virgo) Yeshua Hamashiach, the descendant of the Tribe of Judah as prophesied to be born of a Virgin, born in Bethlehem, who was crucified on a cross, died & rose again for the atonement of sins of the world and became the perpetuation of our sins through His shed blood. His name is Jesus. King of Kings and Lord of Lords.

In the meantime, we had Hurricane Jose & Maria both Spanish derivatives for Mary and Joseph performing the “Fujiwara Effect” which is the Japanese word for dance.

Fox News was reporting that Bible Prophecy Teachers calling them numerologist were declaring the end of the world and the Apocalypse on 9/23 when in fact they were only saying a “GREAT SIGN” but ask those people in Puerto Rico what time the “Apocalypse” started for them… I said, “A GREAT SIGN” nothing more… nothing less.

The word Apocalypse does not mean the complete final destruction of the world, especially as described in the Biblical book of Revelation per the almighty google but instead Apocalypse is a disclosure of knowledge or revelation.

Hurricane Maria's (Mary’s) winds sound "like a woman screaming at the top of her lungs," storm chaser Mike Theiss says. He's riding out the Cat. 4 storm in a hotel in Puerto Rico.

Is it a coincidence that it is 1262 Myriameters from the Temple Mount in Jerusalem to the last recorded latitude & longitude of Tropical Storm Pilar?

Let us not forget that the Constellation Draco (Dragon) sits on the north pole and never moves.

October’s Draconid meteor shower – sometimes called the Giacobinids – radiates from the fiery mouth of the northern constellation Draco the Dragon. Because the radiant is located so far north on the sky’s dome, this shower favors temperate and far-northern latitudes, such as the U.S., Canada, Europe and northern Asia. In 2017, falling on the evening of October 7th-8th, 2017..

The last time the sign of 9/23-24 appeared in the heavens was 5932 years ago and that would be on the Gregorian calendar 5th of August the year 3950BC.
The last sign to appear in the heavens was the star of Bethlehem. How many believed that sign other than Herod who sought to kill all male 1st born children during that time? Maybe 3?

Matthew 2
The Magi Visit the Messiah
2 After Jesus was born in Bethlehem in Judea, during the time of King Herod, Magi from the east came to Jerusalem 2 and asked, “Where is the one who has been born king of the Jews? We saw his star when it rose and have come to worship him.”
3 When King Herod heard this he was disturbed, and all Jerusalem with him. 4 When he had called together all the people’s chief priests and teachers of the law, he asked them where the Messiah was to be born.5 “In Bethlehem in Judea,” they replied, “for this is what the prophet has written:
6 “‘But you, Bethlehem, in the land of Judah,
are by no means least among the rulers of Judah;
for out of you will come a ruler
who will shepherd my people Israel.’”
7 Then Herod called the Magi secretly and found out from them the exact time the star had appeared. 8 He sent them to Bethlehem and said, “Go and search carefully for the child. As soon as you find him, report to me, so that I too may go and worship him.”
9 After they had heard the king, they went on their way, and the star they had seen when it rose went ahead of them until it stopped over the place where the child was. 10 When they saw the star, they were overjoyed. 11 On coming to the house, they saw the child with his mother Mary, and they bowed down and worshiped him. Then they opened their treasures and presented him with gifts of gold, frankincense and myrrh.12 And having been warned in a dream not to go back to Herod, they returned to their country by another route.

Jude 1:17-20
17 But you must remember, beloved, the predictions of the apostles of our Lord Jesus Christ. 18 They said to you, “In the last time there will be scoffers, following their own ungodly passions.” 19 It is these who cause divisions, worldly people, devoid of the Spirit. 20 But you, beloved, building yourselves up in your most holy faith and praying in the Holy Spirit, 21 keep yourselves in the love of God, waiting for the mercy of our Lord Jesus Christ that leads to eternal life.

If you are one of the scoffers & mockers… I would like to ask a very important question. Do you pray in the spirit? Do you even know what praying in the spirit even means?

Praying in the spirit is another form of prayer that is not taught among most denominations. Praying in the spirit is also called praying in tongues or speaking in tongues; though they are really two different things (I Cor. 12:10). Praying in the spirit or tongues happens when a believer is baptized into the spirit. The prayer language (or tongue) is given by God to the believer as evidence of the baptism (Acts 10:44-48, Acts 19:1-7). Speaking in tongues in public is required that only two or three speak and an interpreter should be present; if not then they should keep silent and let them speak to them self and God. Speaking in tongues is a gift that should be desired by all, but not given to all (I Cor. 12:12-31). Praying in the spirit does not require an interpreter but should be desired to interpret. "Therefore let him who speaks in an unknown tongue pray that he may interpret. For if I pray in a tongue, MY SPIRIT PRAYS, but my understanding is unfruitful. What is the result then? I will pray with the spirit and I will also pray with the understanding. I will sing with the spirit, and I will also sing with the understanding" (I Cor. 14:13-15). In other words, when we pray in the spirit, our mind does not comprehend because our spirit is talking to God with the utterance given only by the spirit (Rom. 8:26). And when we yield to the Holy Spirit by praying in the spirit (or tongues) we allow the spirit to pray the perfect prayer according to the will of God through our spirit (Jude 1:20, Rom. 8:26). The Holy Spirit will never force Himself upon you because He is gentle (Acts 9:31, Gal. 5:22-26). But He wishes you to speak with tongues (I Cor. 14:5). God wants us to seek to edify (spiritually enlighten or buildup) the church more than edify ourselves and even more so to have love; for if we have all the gifts of the spirit (speaking in tongues, prophesying, word of knowledge, word of wisdom, etc.) and have not love, it is all of no use (I Cor. 12:4-11, I Cor. 13:1-3).